Daughters are born not from the womb, but from the soul.

Having grown up in a family of three girls, I knew daughters are special, which is how we were raised – with super special treatment, especially when it came to food and sleep. Our parents always maintained that when it comes to daughters, more love is always less. The conventional thought process of girls leaving parents’ home to an anonymous world, ensured more love and trust towards us. When I held my daughter, Sanaa, in my arms for the first time, I just knew that I had done something right in my life to deserve her. She is seven now and every passing day has been special, full of action, fun and learnings. As a working parent, I wait for 6 pm to see my daughter.

I have to admit that ever since Sanaa came into our lives, I have learned much more about life, relationships, happiness, disappointments and leadership from her, than from any book or person around me. She inspires me every day to become a better person and a better professional. I’d like to share our memorable conversations and moments that are lessons in disguise.

Sanaa was about 20 months when I started considering going back to a full-time job. We started looking out for a quality day-care, as I did not want to consider unsupervised househelp to look after her in my absence. We zeroed in on one but were anxious about how she’d respond to being in a new place for 5-6 hours a day. On the very first day, we were feeling nervous, guilty, sad and horrible. As she stepped into the school, she saw colourful walls, pictures, cartoons and other children and her eyes beamed with happiness! I asked her if we can go and she happily said, “Bye!” We stayed there to see if she looks back, but there wasn’t any looking back at all.

Sanaa was three and a half years old when we started playing cards with her to help her memorise numbers, patterns etc. One day, while playing, we realized that she couldn’t read from a distance. Nervous, we went for her eye check-up. The doctor informed us that she’s had an issue with her eyesight since birth.

I was pained to realise the fact that Sanaa was not able to see clearly for these years. She would have been assuming the world to be blurred! 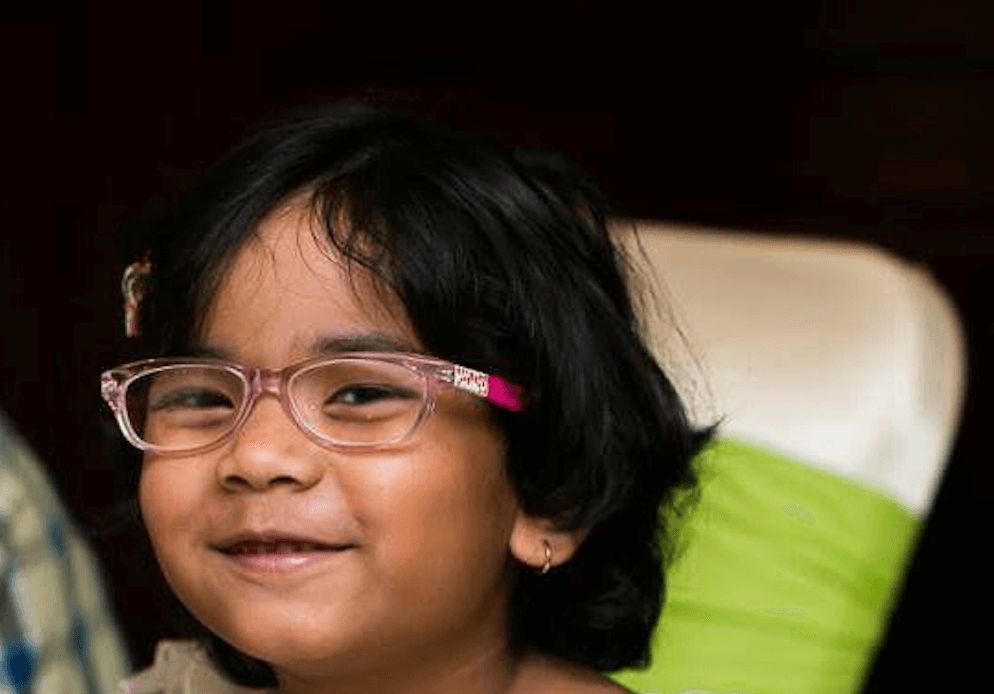 We, as parents, get regular vaccinations done but don’t think of eye-tests once. She started wearing glasses when she was four. But people around us don’t realise the impact of asking small kids, “Why did you get specs?”

To instil confidence in her, I used to Google ‘beautiful girls with specs’ and show her their pictures.

Sanaa was four and a half when we had planned a trip to Disneyland in Hong Kong. She was all set to meet her favourite characters and be treated like a princess. But something came up and we could not go. We were apprehensive of Sanaa’s reaction to the news.

To our utter disbelief, she took the news well and responded with, “If we are not going to Hong Kong, can I at least have a donut?”

Well, life has its ups and downs but the answers to our disappointments are most often easy. We all need to find our ‘donuts’ and get ready for the ride, which is life.

Sanaa was six and she had picked up the concept of ‘relocation’, from her school. One day, Sanaa told ‘me’ a bedtime story. “A family of three kids relocated to Goa. Their mom was a doctor and she found this really nice hospital in Goa, where she picked up a job.” I asked, “What about their father, did he stay in Gurgaon or moved to Goa?” “Oh, the father did not go to the office, he used to stay at home and took care of things at home. So, everyone moved to Goa. They got a lovely beach house, kids used to come home from school and then they would all go to the beach to play.”

That day, I met this beautiful, imaginative and creative child, free from biases and social conditioning and telling us something is really right so far – don’t change how you are bringing me up. Really don’t care, what gender roles are, so long as we relocate to a beautiful beach villa in Goa and get to play in the sea till the sun sets!

I remember Sanaa’s grandparents talking about God’s creations and praising God for creating people. Her simple question was, “If God created everything, then who created God?” Grandpa had to say, “People created God.” (Because they don’t really know who created them.)

But I thought to myself, we can’t assume this little girl to be a blind follower!

I was going through some conflicts in my professional life. Sanaa knew from my reactions and phone calls that something was disturbing me. She asked me, “Is someone troubling you?” I said, “A few people”. To which she responded, “I know you are a good person. Those who are troubling you without reason are called ‘bullies’. Bullies will always follow the bad path, you should avoid them and follow the good path. Bullies will give up.”

I don’t know where she heard this, but my guess is that she learnt it at school.

What’s in a name?

Sanaa appeared for an Abacus exam. When she received the question paper, it came with sections of ‘Student’s name’ followed by ‘Father’s name’. She went up to the teacher and asked her, “Where is the place to write mother’s name?”

As I raise my beautiful daughter, who is independent in conduct and thoughts, has her fears and strengths, is talented, logical, think out of the box and is mature to the core – I get confused about what should be my parenting style.

Do I push her to do more or let her explore by herself?

Do I ask her to take the bulls by their horns or let her be nice but strong?

Do I push her towards healthy food or allow those burgers, pizzas, gol-gappas, chocolates and Maggi?

And then I go back to my parents’ theory, “When it comes to daughters, more love is always less.” Let her be her.

This is a personal narrative written by Deepti Beri, Chief Commercial Officer at SHEROES.

The article was originally published on sheroes.com. You can read it here.